Before I get into driving from San Jose International Airport to La Fortuna, let me provide some context. I was traveling with my husband and we flew in on a red eye flight from San Francisco via Los Angeles. We arrived in Costa Rica at about 7am…so we were tired but also super excited to start our Costa Rica holiday!

Also, really I’m describing the drive to La Fortuna vs. Arenal as in the volcano itself, but since most people colloquially refer to it as Arenal, I’m using that term instead of La Fortuna.

{Self Drive vs. Hiring a Driver}

Most tourists to Costa Rica, self drive. We decided we just didn’t want to. Our entire trip itinerary included Arenal, Monteverde, the Osa Peninsula and Manual Antonio. So we covered a lot of ground. Certainly we went to heavily touristed areas but when we talked about it, we both liked the idea of leaving the driving to someone else. 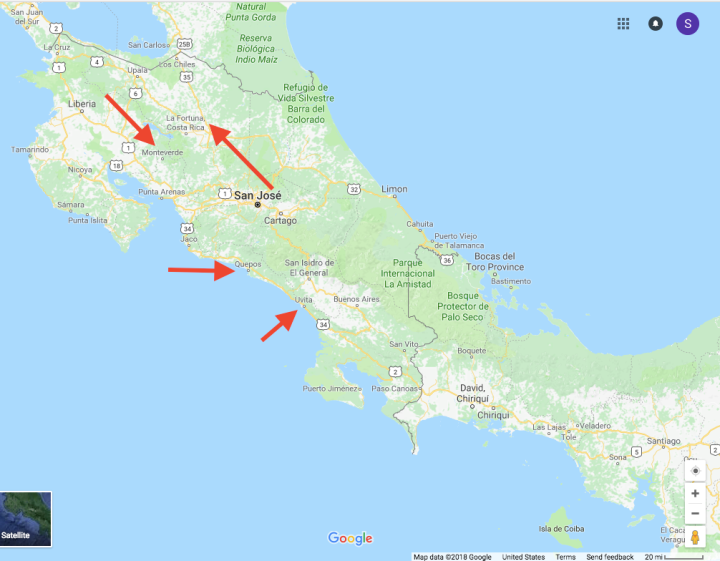 (FYI, I grew up in Southern California, so driving is practically part of my upbringing; and the idea of just staring out the window and enjoying the countryside during long drives on holiday, sounded absolutely blissful).

As you would expect, yes, hiring a private driver throughout our trip did cost more but we were surprised that it wasn’t a whole lot more and again for us it was worth it.

Costa Rica receives 1.7 million tourists a year, a majority of whom are from the United States. And you’ll be glad to know that they do drive on the left-hand side, so no worries there.

We arranged our entire trip through Anywhere.com. I usually plan our trips independently, meaning I arrange everything on my own vs. going through a travel agency or company. I originally contacted Anywhere to help with transfers from city to city. But once I got to talking to their representative, he made so many great, insightful suggestions that I decided to plan and book the whole trip through them. And I’m SO glad I did! We had a fantastic experience! So much so that I booked my Belize trip through them as well!

{Getting to Arenal Volcano}

There are two routes to get to the Arenal volcano from San Jose International Airport, which is in Alajuela (not in San Jose) – the Naranjo and Cuidad Quesado route or via San Ramon. The San Ramon route is shorter and the one we took, so all of my comments are based on that route.

The airport is about 72 miles (115 km) from La Fortuna town. There aren’t many sites to see along the way but if you want to detour a little once you’re in San Ramon, there are beautiful waterfalls (especially Las Muses Waterfall) under 7 miles (about 10km) outside of town.

Like any place you’ve traveled to, it’s awesome if you can converse with the locals in their native language. They certainly appreciate it and warm up to you if you do. Costa Rica is no different. If you have some Spanish game – bonus points. If not, no worries, it is such a touristy country that the guides, drivers and others involved in the tourism industry speak English very well.

{The Drive to Arenal (La Fortuna)}

So let me share some details about the drive itself. In a nutshell it was great! Easy, smooth roads…for the most part, and only about 3 hours long. Along the way we (my husband and I) saw lush fields, quaint towns and beautiful blue skies. Our driver, Raúl, shared facts about Costa Rica’s economy and culture along the way, which we found really interesting.

Observation. As we asked Ticos questions about their culture and country, I was really surprised that no locals uttered a single word about American politics. I visited Costa Rica in May 2017, not long after one of the most polarizing Presidential elections in American history. And for the first time in my years of traveling, not a single local said anything about the United States – good or bad, nor anything about American politics. It was really nice, as my holiday felt like a true escape without any political talk.

{What to Expect on the Drive to Arenal}

After a while you’ll start seeing signs for Arenal and the hot springs so get excited!

Side note: going through Customs at San Jose International Airport was a breeze. I think it took all of 30 minutes (we were there in the early morning, so that’s probably part of why it went so fast), but in general, Customs in Costa Rica takes about an hour. We used the restrooms in the airport to freshen up a little before the drive to Arenal.

Another side note: when you get out of Customs (we flew American Airlines), there’s a little beverage store near the baggage carousels, literally just before you exit the airport. They sell alcohol but not water. Luckily our driver stocked the van with cold water but just an FYI.

Warning: when I was doing research to prep for our trip, I did read about what it’s like to self drive in Costa Rica and one thing forums and websites said, was to avoid driving at night. There are a lot of secluded areas. You don’t want to get stuck in the middle of nowhere at night, especially if you don’t have cell service. And despite how safe it is in Costa Rica there are some bad apples at every destination and tourists are easy targets. Like any destination or really any situation, use common sense, be alert and of course have a ton of fun but keep your guard up too.

{Stick Around San Jose for a Day or Two?}

As I mentioned above, when we landed in San Jose we immediately headed to La Fortuna. San Jose is a lovely city with iconic and historical sites, but we were interested in other activities and sites. Most tourists don’t spend time in San Jose and it’s mostly a transportation and transfer hub.

Did this article help you? If so, let me know in the comments as I LOVE to hear from our readers about their trip planning as well as their adventures afterwards. How was your drive to La Fortuna?

I created the PassportPages travel blog, to provide nuanced, detailed travel advice, tips, and hacks for traveling all over the world — from a unique and different perspective than the other popular travel blogs. There aren’t as many travel blogs geared towards:

As a non-Caucasian there’s an additional layer to traveling abroad that other popular travel bloggers can’t relate to, like my experience on my most recent trip to Paris. 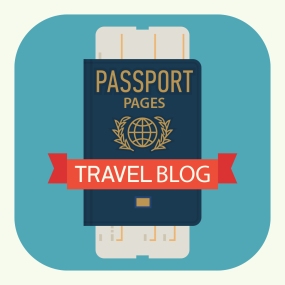 When I’m not traveling and/or adventuring (and even when I am), I operate my tech startup, ShaadiShop. ShaadiShop is a marketplace for Indian-friendly wedding venues in California.

During undergrad I decided to study abroad which triggered my travel passion. I lived in Adelaide, Australia for a year and after that, for the next 10 years I spent 1-2 months each year, traveling to various destinations around the globe, on my own while I managed my direct marketing company.

I think traveling solo, prepared me to become an entrepreneur – journeying into new experiences, figuring it out as I went, self-reliance, facing your fears head on, trying new things, and so much more!

Then I decided to get a Masters in Business Administration, and I met my husband. Now we travel around the globe together and often. I love backpacks, vegetarian and vegan cooking and of course planning our next trip. I’m also kinda addicted to blueberries. =p

Check in on the blog or better yet follow PassportPages to get travel info from around the world. And definitely post your questions and comments. I love hearing from our readers! Cheers!

My visit to #Tikal was a day trip from San Ignacio, #Belize. It was my 1st time visiting a Mayan ruin and I was in awe of how this ancient city was built and dominated the Maya region politically, economically and militarily, without the modern machinery and equipment of today. It was pretty inspirational. Also, I felt like a total badass for climbing all the steps without huffing and puffing -- a few months after surgery. It was like the ancients were tacitly cheering me on, to keep charging ahead!⁠
The #SanFrancisco bay area is on fire right now. Praying for everyone's safety and dreaming of better days by remembering this unbelievably gorgeous hike at @Point Lobos Natural Reserve. That day we also saw humpback whales breaching. I was giddier than a 4 year old girl, who just met Cinderella, while wearing her own princess dress....at Disneyland. I ❤️ California. ⁠
Missing #PeytoLake and #Banff. On the days I miss travel more than usual, I pull out my archives and focus on the memories of the travels I've already enjoyed. And relive the experiences. And that reminds me to be grateful and gracious. ⁠
Wishing everyone happiness and joy in the new year! Happy Diwali! The thing I love about this photo is I took it last week in #montevideo, #uruguay at an Indian inspired vegetarian restaurant. I ❤️ the 🌏!! #travel, #happiness, #joy
Spent the morning today at Kibale National Park chimp trekking. A truly intrepid experience to say the least!!
I loved these fern fronds we spotted during the hike at Kilauea Iki Crater. Reminded me of Willy Wonka's Chocolate Factory.
Loading Comments...
Comment
×
<span>%d</span> bloggers like this: